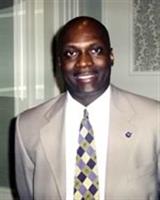 Thomas Jefferson competed for Cleveland John Marshall under the tutelage of Hall of Fame coach Tom Elkins. Thomas was an accomplished sprinter with specialties in the 100 and 200 meter dashes. Thomas also competed for Kent State University where he earned five MAC Titles. He scored in both the NCAA and TAC National Meets, establishing five Ohio Collegiate records in the process. Thomas went on to win the bronze medal for the 200 meter dash in the Olympic Games.