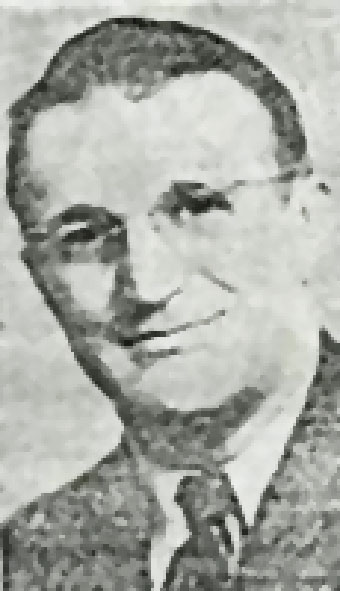 Member and prime organizer of the committee that organized the Ohio Track Coaches Association.

The association’s first track clinic was planned and held in the spring of 1942. That year also brought the association’s recognition of the top five finishers in each event in the state track meet with a certificate. All-Ohio status was added at a later date.

Beginning in 1946, the association published a quarterly newsletter entitled "The Ohio Trackster" with Ed Barker as its editor. The first issue was published in March and advertised the 5th annual clinic which was to be held at the Ohio State University on April 6th. Each issue following the first was edited by a high school journalism class.

In 1962 the track clinic was moved to its current spot on the calendar – the last weekend in January. During the 1964 school year the association began sponsorship of the Ohio Classic meet, held after the state track & field meet. The first Ohio Classic was held at Mansfield Malabar's new all-weather track on June 6th. For several years this was held as an East vs. West meet and team scores were kept. The meet stayed mostly at Malabar High School, but Worthington, Bowling Green and Lancaster also hosted the meet over the years.

The Ed Barker Award, so named to remember his outstanding contributions to Ohio track and cross country, was established in 1964 and is the association’s highest honor. The first recipient was OHSAA Commissioner William McConnell. 1969 brought the formation of the Ohio Track & Field and Cross Country Hall of Fame. Art Hendricks was the first Hall of Fame chairman.

The association began sponsoring an indoor track meet at Denison University in 1974. It was held through 1985 with Marv Crosten serving as the meet manager. Ed Chay began publishing the "Ohio Cross Country News" this same year, maintaining it until 1987 when he sold his business to Carson Cheek.

Also in 1974, Ohio joined Michigan and Indiana for the Tri-State Track & Field Championships. This meet for senior boys was held at Fort Wayne's North High School. In 1977 the meet changed its name to the Midwest Meet of Champions. In 1980 some girls’ events were added and a full complement of girls’ events came in 1984. The meet site moved to Indianapolis in 1987 and then to Ohio Wesleyan University in Delaware in 1997. After that, the meet was hosted by the Michigan Coaches' Association in Jackson, Michigan before returning to the original host site in Fort Wayne in 2010.

During the late 70's, to better serve and represent its members, the association expanded from having 6 districts aligned with those of the OHSAA to the current 16 districts. The association name was also changed to the Ohio Association of Track and Cross Country Coaches.

Other Milestones Our Leadership

In 1997, the association’s newsletter was renamed ''The Runner'' and was published by Herb Hartman.

In 1980, the association began sponsoring the Ohio Indoor Classic at the Ohio State University. In 1981, the association was successful in getting the OHSAA to recognize indoor track and field as a sport without a state-sponsored tournament.

In 1982, the association established a scholarship program for the sons and daughters of its members. This scholarship was named in honor of Marv Crosten in 1997.

In 1987, The OAT&CCC along with the Dayton Area Coaches’ and Officials’ Association co-sponsored the Mid-East Cross Country Classic held at Indian Riffle Park in Kettering. The meet featured 10 of the best senior boys and girls from Ohio, Indiana, Illinois, Pennsylvania, Michigan, and West Virginia.

In 1994, the association began honoring Ohio’s athletes with Academic All-Ohio recognition. This program was initiated by Scott Williamson and recognizes state-qualifying athletes who possess a cumulative GPA of 3.5 or above on a 4.0 scale.