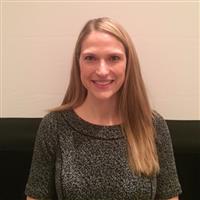 When Sunni Olding left Minster High School in 2004, she left behind a spectacular string of championship level performances rarely seen in state track & field history. In cross country, Sunni was a three time State Champion and led the Minster Wildcats to team state championship titles in two of those years. On the national stage, Sunni qualified from the Foot Locker Midwest Regional to the National Championships in San Diego where she twice earned All-American honors. Her senior year, she was chosen as the National Cross Country Runner of the Year. In track, she was even more spectacular. Minster won the state championship title all four years of her career led by her nine individual State Champion titles and three State Runner-up titles. Her four 1600M titles made her only the ninth athlete in Ohio history to win the same event all four years and she was undefeated in the 4 x 800M, 1600M, and 3200M throughout her junior and senior years. Her 10:32.75 3200M from 2003 remains the Division III record today. Nationally, Sunni won two national 3200M titles and was named USA Today All-American her junior and senior years. She was invited to train at the US Olympic Training Center in Chula Vista, CA and was named by JJ Huddle as one of the top five athletes of the 2000-2010 decade. Continuing her career for Notre Dame, Sunni earned All American honors her freshman and sophomore years. Injuries her junior and senior years hindered her final seasons, yet she was still awarded Notre Dame’s Top Gun academic award winner as well as named an ESPN Academic All-American for graduating with Summa Cum Laude honors. Sunni continues to live in Minster, still runs, and remains an inspiration to the young athletes of the Minster tradition.