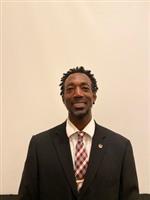 Across the years, the City of Akron has produced some of the most outstanding teams and athletes to ever see the track at the State Championship level, and coming out of Akron East High School, the name of Sean Robbins can be added to that roll call. Sean was a four year letterman for Akron East and was recognized as the Akron City Series Athlete of the Year in 1991. Qualifying for the State Meet in three events—the 100M, the 200M, and the long jump—Sean exhibited the potential of what was to come. From Akron East, Sean went to Ashland University where the long jump became his specialty and over the next four years, he put a stamp on that event not soon to be forgotten. For starters, he set the NCAA Championship Meet Record in 1995, and the following year broke Jesse Owens’ Ohio Collegiate Record with a leap of 27’5.” A 12 time All-American and five time NCAA Champion, he competed in the US Olympic Festival in 1994 and 1995, the World University Games in Fukuoka, Japan (1995), and the Olympic Re-enactment Meet in Athens, Greece (1996). He is currently still listed as one of the Top 10 All Time DII NCAA jumpers coming in at #6 for indoor track and #9 for outdoor. Over the next nine years, Sean was ranked as one of the Top 10 US jumpers with his highest ranking being third in 1998. He competed in over 30 countries as a part of the Professional Track and Field Circuit and was the US Olympic Team alternate in both 1996 and 2004. His PR’s include a 10.28 100M, 20.89 200M, an indoor 400M of 48.43, and a long jump of 27’ 5.” Sean has been inducted into the Halls of Fame at Akron East, Ashland University, and the USTFCCCA. As a coach at Baker University (1997-98) and Ashland University (2000-2006), Sean has helped coach 15 All Americans in the sprints and jumps. Sean founded Fitness & Sports Excellerated LLX and works with Big Ten, Mid-American Conference, and Missouri Conference athletes. He can also be found working as a volunteer at various Akron area charity events. He currently lives in Copley, Ohio.