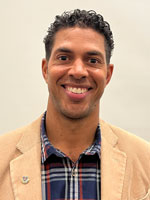 A three sport competitor at Columbus Academy and Westerville North HS, Ryan Wilson exemplifies every coach's argument against the current trend of sport specialization at such young ages. Ryan helped North to a 1995 Soccer State Championship title, played basketball, and - somehow - still managed to win five individual State Championship titles. Ryan stands as an example to all young athletes that you really can have it all if you mix some talent with a lot of hard work and a healthy, positive attitude. The dominant hurdler in Ohio in the 1998, Ryan won the 110HH and 300IH as well as the long jump helping Westerville North win the State Championship team title. He repeated his hurdle dominance in both events in 1999 winning both races and jumped 23' 7.5" to take 3rd in the long jump. The University of Southern California beckoned and there Ryan earned team MVP honors his last three years in recognition of his PAC 10 titles in the 110HH and the 400IH. He was recognized as the PAC 10 Male Track Athlete of the Year in 2003 and won the NCAA National Championship title in the 110HH that same year. A three time All American, Ryan was inducted into USC's Track & Field Hall of Fame For the next decade, Ryan remained a dominant force in the USA Championships including a 13.02 PR in 2007, a 2010 Runner-up title, and a 2013 National Championship title. He competed extensively on the Golden League/Diamond Circuit from 2007-2014 and was the Silver Medalist at the 2013 IAFF World Championships (Moscow). Ryan then turned his attention to coaching and that expertise helped Nia Ali become the 2016 World Indoor Champion in the 60HH and then follow that up with the 2016 Olympic Silver Medal in the 100HH. As a medalist, Nia acknowledged Ryan's excellence in coaching with the Order of Ikkos medal. Ryan currently resides in Los Angeles, California.