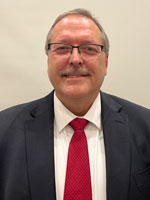 The OATCCC Association was started in 1941, the brainchild of Ed Barker. In 1964, the OATCCC chose his name to represent the award now given as an acknowledgement to individuals who have shown the most exceptional service to the OATCCC and to the sports of Cross Country and Track & Field in Ohio. The OATCCC takes great pride in naming Randy McKinney of Eaton High School the 2022 Ed Barker Award winner for the leadership roles he has undertaken and the major impact he has had on the sports of cross country and track & field. Randy has represented the coaches and athletes of southwest Ohio in a number of capacities helping the sports of cross country and track to grow both as a coach and an official. Recognized on nine occasions as a District Coach of the Year, Randy was the 2003 NFHS Sectional Coach of the Year as well as the Ohio Coach of the Year for boys cross country. While his coaching successes are numerous, so are his contributions as a meet manager to both sports. Randy has been running invitational and relay meets since 1983 as well as summer running camps for athletes from all over his county and road races for runners of all ages. On the state level, Randy has been an integral part of the OATCCC Executive Board representing the Schools of District 13. A member of the Association since 1983, Randy has served as a polling captain for the Division II Cross Country Coaches Poll since 1988. A certified USATF Level 1 and Level 2 (Endurance) coach, Randy has also been a presenter at the OATCCC Cross Country Clinic (2014). For all he has done for the Association, coaches around the state, and student-athletes across the years—the OATCCC is proud to recognize Randy McKinney as the 2022 Ed Barker Award winner. Congratulations, Randy!