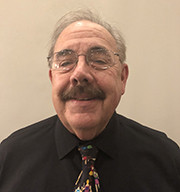 Scott Williamson has been a continuing force in the leadership of track and cross country in Ohio. Scott served on the Executive Board of the OAT&CCC for many years, including a term as president in 1994 & 1995. During this tenure, he instituted, and continues to chair the Academic All-Ohio Award which is now copied by many other coaches organizations throughout Ohio. He also chairs the All-Ohio Athlete Awards program which recognizes state place winners in both track and cross country. Williamson co-chairs the Indoor Classic and Elite Track Meets. The "Runner", the Association's newsletter, is edited by Scott. Scott chairs the selection of the OHSAA Sportsmanship, Ethics, and Integrity Coaches' Award. Williamson has served as the Ohio Girls Head Team Coach for the MidEast Meet of Champions, as well as several years as an assistant Ohio team coach at the MidWest Meet of Champions. Scott has served on the Association By-Laws and Constitution Review Committees. Scott initiated a prominent local road race in his home community. Scott Williamson has also been a successful track and cross country coach at Baltimore Liberty Union High School.