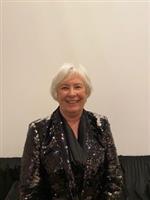 When Nancy Beattie was inducted into the Ohio Capital Conference Hall of Fame in 2018, her contributions to track and cross country—and especially to women’s track—were called “legendary.” For those who have known Nancy, competed against her teams, and been a part of her leadership at the state and national levels as she promotes, not only women’s athletics, but the sports of cross country and track & field as a whole, “legendary” doesn’t quite cover it. Nancy’s 32 year career (29 at Thomas Worthington and three at Bishop Hartley) has seen numerous athletes continue their careers at the collegiate level, has seen its share of State Championship performances—including State Champion Laura McKinley who also went on to win the National Outdoor Championship title, Molly Beckwith who ran in the 2012 Olympic Trials (1:56 PR) and was a part of the world Championship 4 x 800M in Beijing (2015), and Emily Fronz who continued her 800M career at Notre Dame and is now at Ohio State. Nancy’s teams won 12 league championships, two boys cross country District titles, 12 girls track District titles, eight Regional Championships, and were the Division I 1993 State Runners-up. However, Nancy’s contributions to athletes across the state have also been far reaching and have served as a model for women coaches and administrators in sports with many of her former athletes pursuing coaching careers. Nancy served as a member and later President of the Central District Coaches Association before assuming the role of District Representative to the OATCCC, an organization she also went on to serve as Vice President, President, and then in an advisory role as Past President. Her leadership included serving on several OATCCC committees, coaching Team Ohio for the Midwest Meet of Champions, and as a presenter at multiple clinics for both coaches and officials. A USATF Level 2 certified coach, Nancy served on the USATF Women’s High School Committee. Nancy currently lives in Powell, Ohio with her husband, George.