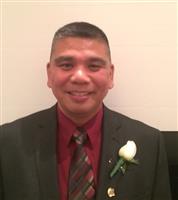 Every coach’s heart has a special place for their alma mater and given any chance to return, will usually do so. A 1989 Wayne High School graduate and former school record holder in the 300IH (39.4) and 4 x 400M (3:19.51), Michael returned to Wayne in 1991 as an assistant coach and then middle school coach. He took the assistant coaching job in 1993 and served in that capacity until 1998 when he was named head coach where he remains today. And the rest, as they say, has been history. Michael brought a level of leadership and motivation that demanded his athletes bring their level of performance up to his level of expectation and they have responded over the years with a roll call of State Championship level performances as well as two Olympic Trials qualifiers (Darien Thornton and Alexis Thomas) Michael’s Warriors have sent 241 athletes to the State Championships with 75 of them earning All Ohio honors including 12 State Champions (11 individuals and one relay) and nine State Runner-up performances including two relays. The indoor track & field program at Wayne has also flourished under Coach Hernandez with 10 individual State Champions at the OATCCC Indoor TF Championships. Michael has had five 4 x 55M Shuttle Hurdle relay champions at the New Balance National Indoor TF Championships as well as another six individuals who placed top six, a total of eleven All American honors in Indoor Track and Field. Michael has coached Team Ohio to Midwest Meet of Champions title in 2014, ‘15, and ‘16. He continues to coach at Wayne High School and lives in Huber Heights, OH.