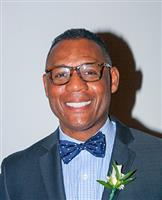 Sometimes in athletics, it just takes a little time to hit one’s stride, and then a “late bloomer” comes out of the pack and shows everyone the diamond that was hidden just beneath the surface. Such a runner was Lewis Johnson of Cincinnati Northwest High School. Lewis was a pretty good high school athlete and every coach out there can use an extra 400M runner. By the end of his 1982 senior year, he had PR’d with a very respectable 51.5 and had also turned a 1:59 800M. He never qualified to the State Meet and he turned his attention to pursuing a communications degree from the University of Cincinnati. And this is where the diamond shined. A high school friend, Doug Wiesman, talked him into coming out for the UC track team—and the rest is history. Lewis’s PR’s in the 500M (:62.68), 600 yds (:70.64), 1000 yds (2:09.16), and 1000M (2:22.64) are still on the UC all time perform-ers’ list nearly 30 years later. His 1:47.00 800M remains a school record as does the sprint med-ley of 3:16.44 thanks to his stunning 1:45.8 anchor which he did at the Drake Relays. UC’s 4 x 400M record of 3:09.93 was not broken until 2010. Additionally, Lewis qualified to the Olympic Trials in 1988 and 1992 and was inducted into the University of Cincinnati Athletic Hall of Fame in 1999. Today, he remains a world class ambassador for track and field as a broadcaster. He has covered seven Olympic Games (Summer and Winter) beginning in Sydney (2000). He continues to cover events ranging from the Diamond Games, the Prefon-taine Classic, and numerous NCAA and world championship meets. Lewis makes his home in Grapevine, Texas and is still a fixture on track and field broadcasts as well as for the NBA.