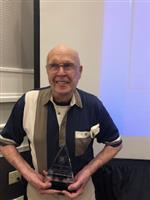 In 1945, Gunder Hagg of Sweden held the World Record in the mile at 4:01.4. Roger Bannister would lower the record to 3:59.4 in 1954, but in between would come a boy from Lima Central High School and later Ohio State University who could run right with them. Although nearly undefeated as a miler during his high school years, his 1948 State Runner-up title (4:28.4) perhaps provided the motivation to be the best in every race after that—and the best was definitely coming. In May of 1948, the seven-year-old OATC chose Leonard to represent Team Ohio in an early version of today’s Midwest Meet where he defeated the top seniors from Ohio, Michigan, Indiana, and Illinois. Later that summer, the Jr. National Championship was held during the Olympic Trials and Leonard was the only high school runner invited to race the 1500M. His sixth place finish(4:04) convinced Ohio State’s coach, Larry Snyder, to offer him a scholarship. As a freshman at OSU, Leonard set the freshman mile record with a 4:23.8. The next year, he became the fastest Buckeye ever with his 4:14.1—then lowered it to 4:10.6 as a sophomore and again to 4:09.7 as a junior. He also set the indoor mile record with a 4:10.4, the indoor 1000M record in 2:11.8, and a stadium record (in the Horseshoe) for the 880yd in 1:52.4. His 1951 Big Ten Championship title in the mile was the first time an Ohio State athlete had ever won the mile and he remains the only Buckeye to ever win both the mile and 880yd Big Ten titles in the same season. The three time All-American won the 1950 NCAA 880yd in 1:50.9 and the 1951 AAU 1500M title in a time of 3:52.0. The mumps knocked him out of the 1952 indoor season and a lingering case of the flu hindered his outdoor season. Nevertheless, Leonard competed in the 1952 Olympic Trials’ 1500M. Only a step behind the third place runner, he just missed a chance to represent the United States at the Helsinki Olympics. However, Leonard continued to compete for the Air Force from 1954 to 1956 during which time he set his PR in the mile of 4:07.0. Today, Leonard lives in Lima, Ohio with his wife, Sonya.