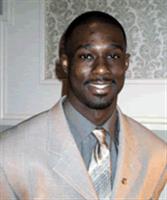 Jonathan Burrell was the speed king of Cleveland John Marshall High School from 1991-93 where he was coached by Hall of Famer Tom Elkins. During his reign, Jonathan set or tied thirteen state records in the 100 and 200 meter dashes and the 4 x 100 meter relay. He was the state champion in 1991, 92, and 93 in the 100 meters. He was ranked number two in the nation in 1991, number three in 1992, and number one in 1993. In the 200 mters Jonathan was the state champion in 1991 and was ranked in the top five nationally in that event. In 1992 he was runner-up in the USA National Championships despite having foot surgery. In 1993 he was again the runner-up at the USA Nationals, as well as the outdoor state champion and was ranked number two all-time in Ohio. Additionally, Jonathan was the Pan-American Champion and the Olympic Festival Champion. Mr. Burrell attended the Ohio State University. He also attended Kansas City Kansas Community College. In 1994 he was the Big-Ten Champion in the 55 meters running 6.20, nad was an NCAA All-American. He set a Big-Ten Indoor Record in the 55 meter dash in 1995.