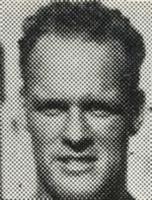 Threw the shot put and discus for Cincinnati Hughes High School and Cornell University. Won the discus in the 1932 Olympics and was fifth in the 1928 Olympic discus. Won one IC4A discus title. Won two national AAU discus titles and scored in three others. Won the shot put and discus in the 1925 state high school meet to lead his team to the championship. Set one Ohio high school discus record.