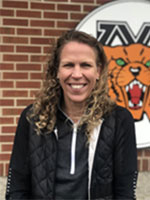 Many coaches find their lives blessed by the opportunity to learn their craft under the guidance of mentors whose expertise and passion for the sport open a window to greatness that perhaps seemed unimaginable at the onset of their own careers. Jessie Magoto had such a mentor in Katie Horstman, a legend in her own right, and did she ever learn her lessons well. Returning to her hometown of Minster in 1999 to teach English and coach, Jessie put her leadership talent to work in both Cross Country and Track where her teams have won a combined total of 15 State Championship titles and six State Runner-up titles. Along the way, her teams have set the records for the lowest number of points at a State Meet (34), the largest margin of victory (97), and the most State titles earned by one team (13). Individual State Champions in Cross Country have included three time winner, Sunni Olding, and the 2017 Champion, Emma Watcke. Additionally, Minster athletes have stood atop the State Track & Field podium on four other occasions as individual State Champions, and another 29 individuals and 31 relays have claimed All Ohio honors. But there is more to being a Champion than just beating people, and Jessie’s peers have recognized these qualities in her bestowing recognition such as three time winner of the NFHS Cross Country Coach of the Year, one time as the NFHS Track & Field Coach of the Year, the Mideast women’s coach (2016-18), the OHSAA Sports, Ethics, and Integrity Award and the Fred Dafler Career Coach Award. And now—the Hall of Fame. Congratulations to Jessie who lives in Minster with her husband and three children. Minster High School Team Titles: District Champions: 23XC 10TF Regional Champions: 14XC 9TF Regional Runners-up: 7XC State Champions: 13XC 2TF State Runners-up: 4XC 3TF