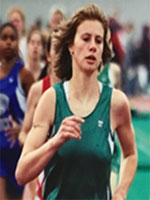 Barnesville HS is no stranger to Hall of Fame caliber distance running and Jennie Castle put the state on notice her freshman cross country season with an All Ohio 8th place finish that propelled Barnesville to the State Championship team title (1997). The coaching dilemma Sean McCate and her dad, David Castle, faced in the spring was where to put such a gifted all around athlete. Jennie could do everything: 200M (26.2), 400M (57.95), 800M (2:12.05), 1600M (5:15), 3200M (11:43), the 4 x 400M, the 4 x 800M - and the 300IH (45.76). The hurdles? Really? These times represent school, league, and District/Regional record setting efforts in 8 of the 12 running events offered at the State Championship level and the 2:12.05 800M won the State Champion title and was the DII State Record for nine years. What an athlete! Before it was over, Jennie earned All Ohio recognition seven times and was a force in both DII and DIII 800M races depending on the classification year. She also helped the 4 x 800M relay to a 3rd place podium finish in 2001. A four time Regional 800M Champion, Jennie set a standard for Southeast Ohio runners that few have reached. From Barnesville, Jennie took her talents to the University of Akron where she was recognized four times as MAC 2nd Team and twice as MAC First Team setting an 800M PR of 2:06.91. When she moved up to the 1500M in 2005, she won the MAC Conference title (4:23.26) and qualified to the NCAA National Championships. Jennie was also known as a student—a regular on the U of A’s Dean’s List and repeatedly recognized as an MAC All Academic athlete as well as winning the USTFCA All Academic recognition on two occasions and NCAA All Academic and ESPN All Academic District Awards on one occasion each. Following her career at Akron, Jennie represented the Atlanta Track Club racing in national level events including the Duke Invitational in 2010 where she Pr’s in the 800M (2:06.78). She was a USATF 800M semi-finalist at the 2008 Indoor Championships, the USATF Georgia 5K Runner-up in 2009, and the USATF Georgia 5K Champion in 2010. Jennie now lives in Kelso, Washington.