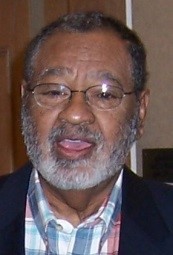 Jim Grey became active in track and field as volunteer worker when his son began participating in age group track in 1976. Jim followed his son throughout his high school years, gradually learning and improving upon his own officiating skills. Jim's presence at track meets came on a regular basis. He became a well known and respected track and cross country official at all levels of competition. Jim's professional approach toward the athletes and coaches advanced his officiating schedule statewide, nationally, and also internationally. Jim became the chairman of the National Officials Awards Committee. Jim has officiated at several Olympic Trials, was the co-chief wind gauge operator for the 1996 Atlanta Olympics, and officiated at the International Paralympics Games in 1992. Jim has been active in the Central District officiating organization (TRACO) through recruiting, teaching, scholarship and awards committees. Jim's easy going, yet professional demeanor has always aided the performances of the athletes he has officiated.