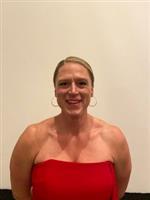 Many times, high school athletics provide the groundwork for that diamond in the rough who goes on to greater things than perhaps anyone ever knew were possible at the time. In the mid 1990’s, at Mentor High School, Jackie Ulm was becoming just such a diamond as she qualified to the Regional track meets in Northeast Ohio before going on to place 5th in the DI Discus as a junior, and 4th in the same event as a senior. And then came Ashland. At Ashland University, Jackie flourished and became one of the leading throwers in the nation. Jackie won the first of her three NCAA Hammer Throw titles as a true freshman in 1999, and would add two more NCAA titles in the weight throw. Adding her shot put and discus events to this level of competition, Jackie earned All-American status 13 times in her collegiate career, winning the Penn Relays in 2002 as well as setting GLIAC conference and Ashland University records along the way (she still holds the AU hammer record). In 2002, she also set NCAA Division II records in the weight throw and the hammer throw. Her 64.85M (212’ 9”) hammer throw record was not only the NCAA Division II record, but also the All-NCAA championship meet record throw regardless of division, a record that stood for the next 13 years. After Ashland, Jackie went on to compete for the USA vs. Germany, and competed in three US National Championships including the 2004 Olympic Trials. Qualifying in the hammer throw, Jackie represented the United States at the 2004 Athens Olympics. Before her career came to a close, she set a personal best in the hammer of 68.83M (225’ 10”). Jackie currently lives in Hilliard, Ohio with her husband, Richard and their two standard poodles.