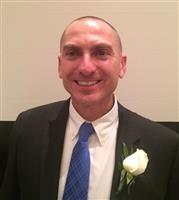 Ira Wentworth When a young athlete has that early appreciation of the gifts which they have been given and a burning desire that every race be worthy of and reflect the appreciation of those gifts, there will be a dedication and work ethic bound to yield a special level of success. Such an athlete was Zanesville’s Ira Wentworth. From 1985-1989, Ira posted a stellar high school career in both cross country and track & field. A three time AAA state qualifier in cross country, Ira earned All Ohio honors finishing sixth as a junior and as State Runner-up his senior year. In track and field, he dominated AAA distance running at the 3200M distance and won State Champion titles in that event in both his junior and senior year posting a high school PR of 9:14. Ira also posted a 4:20 1600M along the way. Choosing to continue his education and running at Malone, Ira became one of those athletes who excelled at the longer races offered by the collegiate format. In cross country, he became only the second athlete in school history to earn NAIA All American honors in each of his four seasons of competition. Individual titles include Mid Ohio Conference champion (1995), All Ohio XC Meet champion (1990), and NCCAA Nationals Champion (1990). His 31:14 10K PR was the Malone cross country record until 2014. In track, Ira was a multiple NAIA Indoor and Outdoor All-American posting a 13:53 5000M PR at the Penn Relays (5th place) which still stands as Malone’s school record. In 1990, he won the NCCAA championship title in the 1500M and went on to win the 1991 NAIA National Runner-up title. His 3:50.4 1500M performance remains 4th on Malone’s performance list and his 4:10 indoor mile record now ranks 3rd. Ira has been recognized as Malone’s Graduate School Alumnus of the Year (2008) and was inducted into the NAIA Athletic Hall of Fame and the Malone University Hall of Fame in 2004. Ira continues to serve others as the Superintendent of the Indian Valley LSD. He and his family live in Sugarcreek, OH.