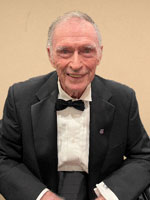 A 1937 OHSAA survey showed only 55% of the schools in the state had women’s basketball, but 67% of those favored dropping it. By 1956, another survey indicated that less than half of the state’s school offered young women the chance to participate in sports. Then came Harry McKnight. As high school athlete, Harry was a member of the 1944 State Runner-up team at Columbus East HS. Drafted out of high school, Harry joined the Marines and fought at Okinawa in 1945 at the battle for Sugar Loaf Hill where 240 men of Company C went up the hill—only 16 came back. Upon his discharge at the end of the war (1946), Harry entered Ohio State University on the GI Bill and was a pole vaulter for Ohio State’s Big Ten Championship team of 1948. As an ROTC graduate and commissioned officer, he would serve in the Ohio National Guard for another 26 years, participate in the Berlin Airlift, and retire as a Lt. Colonel—all the while competing locally and nationally in the pole vault until 1961. It was also in this time period when he found his true calling as a teacher and a coach and would serve the Columbus City Schools at East HS (1951-61) and Walnut Ridge HS (1963-86) over a 36 year career. He helped found the Ohio Track Club in 1954 that helped recruit and develop athletes like Glen Davis (two time Gold Medalist, Rome) and Jack Moreland (1964 Olympian, 20K Racewalk). Then in 1959, under the guidance of Harry and Alex Ferenczy, the Women’s Division of the OhioTrack Club was formed in order to promote track and field for girls’ and women’s competition—long before the OHSAA or NCAA would contest Championships (1975 for the OHSAA, 1982 for the NCAA). This program produced such greats as Estelle Baskerville (1964 Olympics, high jump), Sue Knott (6x National AAU 440 yd dash Champion and former World Record Holder for the Indoor 440Y), Laurie Barr (1971 Pan Am Games, 200M), and Beth Hudson (national class sprints and hurdles). Harry’s high school athletes included Champions Jim Marshall (1955, Shot Put) and Howard Brook (1957, Pole Vault). Art Angel was a Runner-up (1959, 120Y Hurdles), Brian Slane went on to become Ohio State’s first 17’0” pole vaulter, and Bernie Casey was a finalist in the 1960 Olympic Trials. He coached the 1968 USAF Team at the 1968 AAU National Championship and was the head coach for the winning Women’s USA team in its meet vs. Russia (VA), and was also the head coach for both the men’s and women’s teams vs. Russia in St. Petersburg. Harry has been recognized by a number of Halls of Fame, and for his pioneering work in women’s athletics, was awarded the inaugural USATF Hometown Hero Award in 2017. At 95 years old, Harry still resides in Columbus.