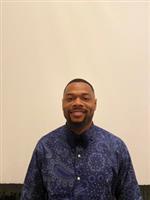 Top athletes are never satisfied with their accomplishments and seem to have an awareness of themselves in that—if they’ll just stick with it, if they work hard, if they keep their eye on the horizon with a clear vision of what could be—great things will come. David Payne is the epitome of this dedication to his event and the work ethic it takes to be a champion. Representing Wyoming High School, David did not make it to the State Meet until his senior year (1999), but then he made it in three events. His third place 100HH finish was not perhaps indicative of the career to follow, but his 6th place 400M and contribution to the 7th place 4 x 400M showed that the strength was there. From Wyoming, David went to the University of Cincinnati where, under the guidance of Coach Elisha Brewster, he became a technician of his event setting school records in the 60HH (7.62), the 110HH (13.42), the 400M Hurdles (51.16), and the Shuttle Hurdle Relay (57.23). A two-time All American in the 110HH, he finished 3rd in 2003 and 4th in 2004. His contributions to UC’s conference championship that year plus his qualification to the Olympic Trials were later recognized when he was named the C-USA Athlete of the Decade. Following UC, David went to Osaka as a part of the World Championship team where he finished third in the 110HH with his PR time of 13.02. In 2008, with his eyes on the Olympic Trials, David finished third and made the US Olympic Team headed for Beijing. Running nearly flawless races through the prelims and semis, David eventually finished second to Dayron Robles of Cuba and won the Silver Medal. The following year, David again finished third at the World Championships in Berlin—his fourth world medal—and he also won the USATF Outdoor Championship in the 110HH. David Payne was a National Champion and the best hurdler in the United States. All of that hard work and dedication had paid off. He remains the fastest 110M hurdler in Ohio history—no small feat since Olympic Champions Harrison Dillard and Willie Davenport are also from the Buckeye state. David currently lives in Cincinnati, Ohio.