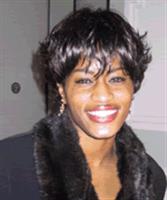 Carmen Banks is a graduate of John Adams High School in Cleveland. She ran under the guidance of coach Monica Gary frfom 1992 through 1994. This talented hurdler set or tied eleven indoor and outdoor state records. She won seven individual state titles including three in the 100 meter high hurdles, three in the 300 meter low hurdles, and one in the 200 meter dash. Her best time in the high's was 13.50, run at the Junior National Championships in 1994 earning her second place. Ms. Banks was also a member of the Pan American Team. Her best in the 300's of 41.80 ranked her the fastest high school runner in the nation in 1994. She run her best 200 of 24.30 in the Austintown Regonal in 94. Carmen led her team to the Division I State Championship in 1994 by scoring twenty-eight of the teams forty points. Ms. Banks also won three events in the Mid-West Meet of Champions.