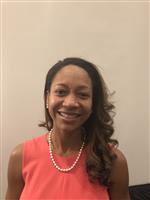 Multi-event athletes are always fun to watch at the State Meet, not only because of the appreciation of such fantastic all around talent, but also because of the anticipation of what that athlete might do at the next levels of competition in the Pentathlon and Heptathlon. Cameé (Williams) Beyers of Springfield South High School won her first State Championship title (300M H) as a 14-year-old freshman, the youngest athlete from Clark County to do so. She had already taken 2nd in the 100HH and track enthusiasts put a check next to her name in their programs as a kid to watch over the next three years—and she did not disappoint. As a sophomore, she won the Long Jump and set a state record (her 20-1¼ jump remains the #2 all-time jump in Ohio), took 2nd in both the High Jump and 300IH, following a 4th place run in the100HH. That summer, at the Junior Olympic National Meet in Houston, she set a National Record in the High Jump (5-11¼) in 15-16 age group. In February of her junior year, her National High School Championship title in the Pentathlon sent a message to the rest of Ohio that she would be ready for the State Meet that spring. Cameé won the High Jump, Long Jump, and took 2nd in the 300IH, and 3rd in the 100HH earning her school 34 points and winning the Division I Runner-up team title by herself—a follow-up to the Regional team title she had won the week before. A back injury in the 1998 Regional Meet robbed us all of a chance to see what she might do her senior year, but she left her high school career behind having earned All-American honors in five separate events. At the University of Illinois, Cameé’s Big Ten Pentathlon championship also set a stadium record at Penn State. She set the Big Ten Heptathlon 100M H record on her way to a Runnerup performance. She won All-American honors in the indoor 60HH and the outdoor 100HH. At the Drake Relays, Cameé ran the second leg of the 4 x 100M shuttle hurdle relay team that set a National, Collegiate, and World Record in 2001. It was the first time any relay was named the meet MVP. Cameé also earned several scholar-athlete awards at the University of Illinois. Cameé remains one of Ohio’s finest multi-event athletes. She is an English teacher and has her own health and wellness business. She resides in McLean, Virginia with her husband, Ben, and two daughters, Jacqueline and Simone.