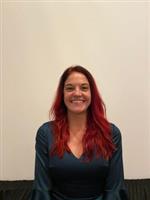 Graduating from Seneca East High School in 1999, it is fair to say that the accomplishments of Briana Shook may make her one of the most decorated athletes in school history. Many of the records she set in cross country and track in the course of her four-year career still stand on courses around Northwest Ohio. In cross country, Briana won two State Championship titles and helped her team to three District and Regional Championship titles, the State Runner-up title in 1997, and the State Championship in 1998. It was the same on the track where she earned five more State Championship titles. Her 1997 State Championship time in the 3200M remained the state record until broken by another Hall of Famer, Sunni Olding of Minster, in 2004. At the University of Toledo, Briana helped set the standards for the future, many of which still remain. She was a three-time All-American in both cross country and track, holds individually or as part of a relay eight current Toledo records, won 11 Mid-American Conference titles, and helped guide the Rockets to the XC league titles in 2001 and 2002. Honored with numerous “Athlete of the Year” awards at all levels of competition, her 2004 3000M Steeplechase record of 9:29.32 set the American Record and stood until broken by Jenny Berringer at the 2008 Olympic Games in Beijing. She remains the 13th fastest woman in US steeplechase history. Following her competitive career, Briana joined the coaching ranks of her Toledo alma mater and helped coach Ebba Stenbeck to an 8th place NCAA All-American finish. Stenbeck holds the #2 MAC time in the event second only to Briana. After four years at Toledo, Briana then went to Heidelberg University from 2010-2013 where she was named Coach of the Year in 2011 and 2013 for the excellence her athletes achieved under her tenure. Thirteen athletes were named All-American and two were National Champions. Briana lives in Mexico, Missouri with her husband, Robert, and their daughters, Haleigh, Atley, and Georgia.