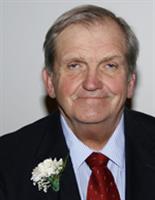 For 41 years Brian Tucker has represented Bowling Green High School with honor and dignity. His dedication to the athletes and students in which he comes in contact sets the standard for others to follow. As the Head Coach of the boys cross country team since the Fall of 1969, Coach Tucker’s teams have compiled a dual meet record of 333 wins and 206 losses. His teams have captured two League Championships, being named League coach of the year twice. In addition, his squads have captured one Regional Title along with several other Regional appearances and a State appearance in 1980 when his Bobcats placed 12th. His teams have also captured 7 County Championships and have won numerous other invitational titles through the years. Several boys have made individual appearances in the State Meet as well. Coach Tucker’s Girls teams have been truly outstanding. They have captured three State titles, one Runner-up finish, and one 9th place finish. The Bobcats had a 27 year winning season streak broken two years ago and during their three consecutive State Championships, the Bobcat girls had a 60 meet winning streak. He has been named coach of the year 7 times in his league and his teams have numerous invitational championships including some of the most famous meets in Ohio. His team also captured 2nd place in the 2004 Mid-West Meet of Champions, losing by 7 to the third rated team in the nation, Clarkston, Michigan. In 2006, his team captured the Mid -West Meet of Champions title. Finally, in 2004, the Bobcats participated in the first National Nike Championships in Portland, Oregon where they placed 15th in the country. The BG Girls have compiled a dual meet record of 304-121, giving the Bobcats a cumulative dual mark of 637-327. BG’s highest national ranking was in 2004 when they were ranked 9th. Coach Tucker has also been the recipient of two previous honors at this awards ceremony, being presented the Ethics and Integrity Award and the Fred Dafler Award. Coach Tucker has also served the Bowling Green Track Program as assistant coach under Hub Reed for almost 30 years and has just completed 10 years as Head Coach.