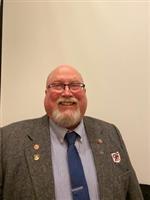 The OATCCC Association was started in 1941, the brainchild of Ed Barker. In 1964, the OATCCC chose his name to represent the award now given as an acknowledgement to individuals who have shown the most exceptional service to the OATCCC and to the sports of Cross Country and Track & Field in Ohio. The OATCCC takes great pride in naming Bob Hollen the 2020 Ed Barker Award winner for the leadership roles he has undertaken and the major impact he has had on the sports of cross country and track & field. Bob had already served on the Central District Association from 1988-1989 before he became involved with the OATCCC in 1994 as a District 11 alternate for Scott Williamson. When Scott moved up to the Vice President’s role, Bob took over as representative and began assisting OATCCC historian, Craig Whitmore, compiling Craig’s notes of state records, event progressions, and state champion athletes and coaches, continuing in this capacity until just prior to Craig’s death. In 2000, Bob became the OATCCC President during which time he helped present the proposal that led to girls pole vault as a championship event in 2002; designed the certificates used for Coach of the Year, Academic All-Ohio, and All Ohio recognition; and helped develop—and through 2016, administer—the Association website. He also served on multiple games committees including twice with the OHSAA State Championships. Additionally, Bob has been a presenter at the Georgia Coaches Clinic in Atlanta as well as several Ohio clinic panels, has served as the girls head coach for both the Mideast Cross Country and Midwest Meet of Champions teams, started the Granville TF and CC invitationals, directed the league championship meets from 2006-2012, and has served as the official OATCCC event photographer at our championship events from 2005 through 2015. For all he has done for the Association, coaches around the state, and student-athletes across the years—the OATCCC is proud to recognize Bob Hollen as the 2020 Ed Barker Award winner. Congratulations, Bob!