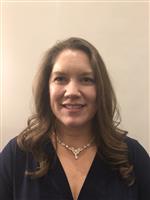 Coach Gary Lill used to kind of joke about how he was never a thrower, but it never seemed to stop him from producing great throwers at the State Championships, and Beth Weyer (now Hubans) was one of the best. A great all around athlete—she was a six time varsity award winner in volleyball and basketball as well as team captain and MVP in both sports—Track & Field was where she made her mark at the State Championship level. Coming out of Sandusky St. Mary’s High School, Beth dominated the throwing events in Northwest Ohio during her high school years of competition. Her Sandusky Bay Conference championship as a freshman was the first victory she would earn at the league level of competition and she became the first girl to win the SBC in all four years of competition. In her sophomore year, she won the Regional discus championship title on her way to winning her first of four State Championship titles. Her junior and senior years, she added the shot put to her agenda and won the Regional discus and shot put titles in both years. Beth took the State Champion title in discus for the second and third times in those two years and also won the shot put her junior year. Her senior year, she was the State Runner-up in the shot put. The four time State Champion went on to win the discus at the Midwest Meet of Champions in 1997 and also took 4th in the shot put for Team Ohio winning her the MVP title.. Recruited by Kent State, Beth added the hammer and the weight throw to her event schedule and excelled at both. In 2002, she was the MAC discus champion and also took second in the hammer hitting the NCAA provisional qualifying mark in both events. At the conclusion of the season, she was named the KSU 2002 Outdoor TF Athlete of the Year. She was the Kent State and MAC record holder in the hammer throw as well as being currently ranked amongst KSU’s top ten all-time performances in the discus, the hammer, and the weight throw. Beth currently teaches for the Danbury Local Schools and is the Head Girls Track & Field Coach of the Lakers. She lives with her family in Oak Harbor, Ohio.