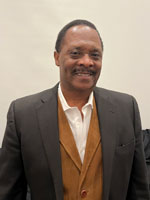 Known for their ferocity and strength, “Wolverines” has proven to be an apt mascot name for the Dunbar Track & Field program under Coach Sidney Booker. A lifetime of devotion to the young people of Dunbar High School—Sidney has been at the helm of Dunbar Track & Field for 43 years—these Wolverines could not have had a better mentor from whom to learn. Dunbar’s prowess, especially in the sprint events and the relays, has set a level of excellence that may not be achieved again in a single coaching career. Under Coach Booker, Dunbar has—in addition to its State Championship and State Runner-up titles—finished in the top 10 on five other occasions. There have been 25 Dayton City League TF Championship titles and 13 Cross Country titles with Sidney being recognized as the Dayton Public League Coach of the Year those 28 times. Athletes have won 22 individual and relay State Championship honors and many others have been recognized for their All Ohio performances. State records have been set in the outdoor 4 x 400M and the indoor 4 x 200M, 4 x 400M, and the 4 x 800M. Brian Bell set the Ohio indoor 800M record on his way to two National Indoor Championship titles in the 800M as well as qualifying for the Junior World Championships. Dunbar broke the National Record in the indoor Sprint Medley and individuals have earned All American honors 18 times including two-time Olympic Trials qualifier, Antonio Blanks in the 400M. An OATCCC, NFHS, and USATFCCCA National Coach of the Year winner, Sidney has also been named the Southwest Ohio TF Coach of the Year on eight occasions and served as hurdle coach for Team Ohio at the Midwest Meet of Champions. Sidney lives in Dayton, and for his lifetime of devotion to the Dunbar Wolverines, congratulations on the Hall of Fame! Dunbar High School Team Titles: State Championships (Outdoor): 4 State Championships (Indoor): 8 State Runners-up (Outdoor): 2 State Runners-up (Indoor): 1 Regional Championship titles: 12 District Championship titles: 13