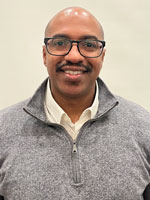 The 400M is considered one of the most challenging races in Track & Field, requiring the combination of strength and speed endurance. At Thomas Worthington High School, that perfect combination can be summed up in two words: Shannon Wheatley. Some people are blessed with natural speed, but regardless of the level of athlete, one has to work hard to make those incremental progressions that come at the highest levels of competition. Wheatley's work ethic defined his high school career. Shannon’s 6th place finish at the 1997 State Meet in 48.98 and leadoff leg of Worthington’s 4 x 400M were a glimpse of what that work ethic might yield, but there was never any doubt in the mind of his coach, Andy Cox. Cox saw Wheatley's character and leadership on and off the track as Wheatley was elected as President of the Class of ’99. Wheatley's junior campaign started with adversity. He broke his ankle during the basketball season and had a limited amount of time to train before the start of the outdoor season. Despite that, he finished the season as State Runner-up with a time of 48.63 in 1998 at the final state meet at the Horseshoe. He pushed himself and his teammates and followed up his runner-up finish with his State Championship double in the 200M (21.87) and the 400M (47.10) in 1999 at Welcome Stadium in Dayton. His 46.7 relay split to capture the 4 x 400M and team title was the end to a fantastic high school career that included All American recognition on six different occasions during the Indoor and Outdoor National Scholastic Championships. Wheatley headed south to the University of Tennessee, where he set school records, became an All-American, and was a member of Tennessee's 2001 SEC and NCAA Championship teams. Following a career-ending injury, Wheatley graduated with a degree in History and has continued to translate his work ethic into serving others as an educator, a coach, and advocate for Track & Field. He now resides in Sacramento, California, with his wife and two children.