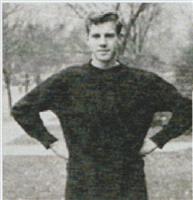 In the 1930’s, going to the movies was a special treat, and—as the story goes—Bob Curtis’s parents told him that if wanted to go to the theater on Friday nights, then he had better get home early. Coincidentally, that mile from the theater to his home was also the distance to school so he got plenty of practice covering that distance. By the time he entered Shaw High School in 1933, the smooth, gliding stride for which he would be know had become second nature—and Ohio’s next great miler was ready to take center stage. As a runner, the “Iron Pony” won the mile his junior year with a 4:31.3 time ranking him fifth nationally and just shy of Ohio’s record of 4:29.7. Bob culminated his high school career in 1936 by winning the State Championship title in the mile with a 4:26.6 State Record that would stand for another 22 years, and his time just broke the national and world record time set in 1930 by the “Iron Horse,” Glen Cunningham, while he attended Kansas Elkhart High School. In 1937, Bob joined the team at Ohio State University to continue his running career, but in 1938, he left the University to join the National Guard and was mobilized into the United States Army prior to the start of World War II. As a paratrooper with the 82nd Airborne, Bob jumped behind enemy lines as a part of Operation Market Garden—featured in the 1977 film, A Bridge Too Far—, an Allied strategy intended to break the German lines and free The Netherlands. In December 1944, 1st Lt. Curtis’s unit while plugging the line to stop the Axis attack during the Battle of the Bulge came under heavy German artillery fire in the Ardennes Forest. Severely wounded with over 100 pieces of metal in his back and lower legs and bleeding uncontrollably, Bob survived his life threatening injuries to return home a hero and winner of the Purple Heart. But—no more running. Bob’s life serves as a reminder to us all—coaches and athletes alike—that the lessons of discipline and character taught and learned on the field of competition carry on in our lives in ways perhaps unimaginable while on the track—but transcending the years and serving as examples of courage and devotion. Bob is pictured here as a high school athlete and later with his wife, Edna. He died February 7, 2014 and is buried at the Western Reserve National Cemetery.