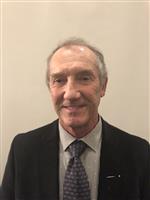 Dick Bruggeman. A 1965 graduate of Marion Elgin High School, Dick used the lessons taught by Coach Dale Kinsell to set school records in the 120yd high hurdles, the 180yd low hurdles, and the 440yd dash. At the 1965 State Meet, his fourth place in the 120yd HH and contribution to the Comets’ State Championship mile relay came up just short of the State Runner-up title in Class A Track & Field. From Elgin, Dick went to Ohio State where Coach Frank Zubovich took advantage of his emerging middle sprints protégé to dominate the Big Ten in the 440yd hurdles and the 600yd run. Dick won the Big Ten 440yd hurdle title in 1968 and the Runner-up title in 1969. In 1970, Dick took Runner-up honors in the 600yd run and set an Ohio State Indoor Track & Field record of 1:09.3. In addition to helping set another Ohio State record in the mile relay, Dick also garnered All-American honors in the 600yd run. Following his Ohio State career, Dick turned his focus to the 400M hurdles and national and international competition. With several key championship performances including a USTFF Championship, AAU Championship, and All-American honors in the 400M, the 1972 Olympic Trials followed. At the Trials in Eugene, Oregon, Dick finished 2nd to make the US Olympic Team that would later travel to Munich. Dick’s lifetime best of 48.6 was, at the time, the #4 fastest time ever run. Dick continued to compete in the 400M hurdles after Munich, and in 1975, was a member of the first U.S. National Track and Field Team that toured the People’s Republic of China. Today, Dick resides in Powell, Ohio.