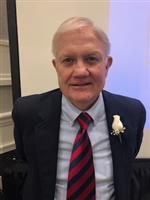 When someone has coached for nearly four decades, their name and the institutions at which they coach become synonymous—and such is the case with Defiance High School and Obie Mouser. No discussion on the history of running in Northwest Ohio would be complete without including the accomplishments of Coach Mouser’s program and the athletes across the years who won numerous titles and continued those careers at the collegiate level. Obie’s 37 year career in Track & Field and 28 years in Cross Country included four years at Defiance College (1980-1983) where five athletes qualified to the National Championships in-cluding hurdlers Dave Hodge and Jim Clifford, 60M sprinter Larry Nathan, and 800M runner, Jim Cross. Doug Murray earned All-American honors in the Decathlon and Craig Cox—after earning All Ohio honors in the hurdles—won the MAC Decathlon for BG and Doug Wlles was 8th in the nation at the 1500 m. Defiance High School’s record under Obie is no less impressive with his cross country teams qualifying to the State Meet on 15 occasions. Obie’s athletes have included such greats as four time All-Ohio Partrick Mouser he was in the CC meet 4 times and 4th place twice and in the state meet for track 3 times and placed twice, one time as 3200M State Champion, Abel Flores was state CC meet 4 times placing 6th, 2nd and 2nd, and in track twice 3rd and State Champi-on. State Runner-up in the mile, Jim Windnagle, went on to run at Toldeo earning all MAC hon-ors as did 400M athlete Martine Wurst at Miami. Eric Steyer was an All Ohio 800M at Defiance before winning the MAC title for Miami. Kim Hill was a All State high jumper— while All-Ohio Cross Country and Track athlete, Zac Wiles, went on to be a nationally ranked Steeplechaser for Boise State. Obie currently resides in Defiance, Ohio. Defiance High School Team Titles / Individual Titles: District Champions: 15 District Champions: 42 Regional Champions: 4 Regional qualifiers to the State Meet: 71 State Runners-up: 1 All-Ohio performers: 40 State Champions: 1 State Champions: 5