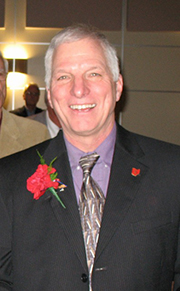 Neal Charske began his coaching career at Fairmont High School in Kettering, Ohio. He continued to coach for the next 42 years. He has also been an official since 1964. Neal is a proud member of 4 Halls of Fame for both coaching and officiating. He was awarded the Ed Barker Award for contributions to track and the Fred Cope Award for outstanding officiating. During his career, Neal has worked in many capacities. He is past and present meet director for the Dayton District in Cross Country. He has worked at many USA track meets, both National and local. In 1964, Neal started the Kettering CC Invitational which is now one of the largest high school meets in the State. In 2003, Neal was meet director for the National AAU age group CC meet. In 1996, he was chosen to clerk at the Atlanta Olympics. At the State level in Ohio, Neal has served as clerk and starter for the State meet in track and clerk for cross country. Neal is especially proud that he developed the Mid -East Cross Country Championships, an all-star meet for the top senior runners from 4 states. On a State Association level, Mr. Charske served as President and is currently the Chairman for the Hall of Fame Committee. Locally, he is the driving force behind the Southwest Dayton Officiating group. Neal Charske is a true asset to Track and Cross Country in Ohio.