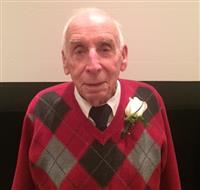 Marv Frye has been a winner all of his life as an athlete and a coach. As a high school athlete in basketball, he helped Akron Ellet HS win the 1944 Ohio Class B Championship and District titles in 1946 and 1947. He lettered in track and basketball at Heidelberg before graduating in 1951, did two years at Bellville HS as head coach in basketball and track, and then returned to Heidelberg where he helped the football team win Ohio Athletic Conference Championships in 1954, ‘56, and ‘59. His 1960 track team went undefeated and also won the OAC. For these accomplishments, Marv was inducted into the Heidelberg Hall of Fame in 1995. In 1960, when he went to Ohio Wesleyan to take over the head track and field coaching job is when Marv made his mark on track and field in Ohio. Over the next 37 years, he built Ohio Wesleyan into a perennial power in the OAC, and now the North Coast Athletic League. The regard in which he is held as an educator, mentor, role model, and friend to hundreds of OW athletes was perhaps best demonstrated in 1985 when his athletes donated nearly $300,000 to build the all-weather track at OWU, twice the site of the DIII National Championships as recently as 2014. Marv’s teams won three NCAC titles. He has coached 123 conference champions, 25 NCAA Division III All Americans, two Academic All Americans, and seven National Champions. His athletes still hold 14 of the 22 school records. Marv has been named NCAC Coach of the Year on two occasions (’90, ‘96), and was inducted into the Ohio Wesleyan Hall of Fame in 1997. In 1974, he was elected as the first ever president of the DIII TF Coaches Association. H e served as host and meet director for the 1984 NCAA Cross Country Championships and also served as Meet Director of the All Ohio XC Championships for 37 years. Marv is also highly respected for the 24 times he has served as referee for the NCAA National Championship Meet. Marv and his wife, Ellen, live in Delaware, Ohio.