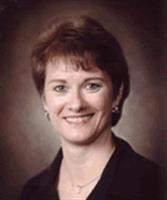 While attending Solon High School, Julie Stibbe Steible was an outstanding member of the track and cross country teams. Under coach Cathy McArdle, Julie was the first athlete to win the 880 yard run in the state meet all four years of competition (1976-79). She also won the state mile run in 1976. e scoring in the NCAA Championships. She also scored in the Penn Relays, Sea Ray Relays and Drake Relays. Julie was also a member of the winning two mile relay at the AAU Outdoor National Championships in 1975.