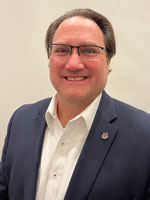 When a pole vault pole breaks, it sounds like a shotgun going off—everybody stops what they’re doing and looks. The story about John Coyne is that he calmly walked over to his equipment, pulled out a new pole, and without hesitation came right back down the runway to clear the winning height. Pole vaulters—there is a mix there of talent, precision, and a little crazy that inspires all of us to watch when they soar to heights that make others a little dizzy. And John Coyne could soar! A two time State Champion in his event, John was the standard by which all other pole vaulters in Ohio were measured. His 16’4” jump to win the 1986 State Champion title also set the State Record for all divisions and stood for the next 24 years. As a State Meet and Division II record, however, the 16’4” jump would stand for another four years after that. He still holds the records for Medina County and Buckeye High School—both Sports Halls of Fame into which he has been inducted. Additionally, John earned All American honors at the Pathmark National Scholastic Indoor Championship and the Golden West National Outdoor Championship placing third in both meets. He was recognized by the National High School Athletic Congress Association as a Track All American (1986) and was Ohio’s Gatorade Player of the Year for Track & Field. After high school, John headed for Knoxville where he became Tennessee’s Freshman School Record holder and held the school record in both indoor and outdoor. With major wins at the Penn Relays and in SEC competition, John also achieved at the national level qualifying to the NCAA National Championships twice each in indoor and outdoor, and winning All America honors on two of those occasions. The four year letterman came back from an injury in 1990—for which he was recognized with both the Comeback of the Year Award and UT’s Toughest Competitor Award, John was a part of Tennessee’s 1991 NCAA Outdoor National Championship team. Following his graduation from Tennessee, John returned to Northeast Ohio and earned his law degree from Cleveland State University before returning to Medina. He continues to serve his community as President of Medina’s City Council giving back to the community in which he was raised. John and his wife, Jennifer, have three children and still live in Medina.