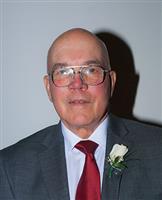 Good coaches just have that Midas touch at whatever they choose to pursue and Joe Rider Horn is no exception. He has coached soccer (5 years) - and won. He has coached basketball (8 years) - and won. His football teams (coached for 10 years) won league championships four times in a five year period. But it is for his contributions to the sport of Track & Field and the accomplishments of his athletes spanning a 39 year career at Benjamin Logan and Waynesfield Goshen that Joe enters the Hall of Fame. And — he has coached the Horn family. Four generations of the Horn family have competed in track and field. Joe’s father, Joe Ash-ley Horn, was a top all-around athlete in the 1920’s and competed for Miami. Joe coached his sons Jay (Air Force Academy) and Jon who is still listed as one of the Air Force Academy’s top high jumpers. Joe Neal Horn was a four time State Champion who swept the sprint events in 2006. Gray Horn, was a State Champion and is currently at Tiffin University training and at-tempting to qualify for the 2016 Olympics in the decathlon. The family tradition has also in-cluded coaching Ivy Horn who signed in 2012 to run for Ohio State and Morgan Horn who signed in 2013 to run for the Air Force Academy. In fact, 9 of the 17 boys records at Goshen have the Horn name beside them as do 7 of the 17 girls’ records. But—it has not just been the Horn family. There has been a long line of excellent athletes at Benjamin Logan where Joe’s boys’ team won the 1992 District and Regional Championships, and at Waynesfield-Goshen where they have won the league title twelve times and the State Championship in 2006. There have been seven individual and two relay champions in outdoor track, eight champions in indoor track, and 38 All-Ohio selections. Joe hosted USATF summer meets for a number of years as well as serving on the OHSAA State Rules Advisory Board. As a teacher of Special Education, he helped initiate programs in Character Education and Service Learning. Joe continues to coach and live in Waynesfield, Ohio