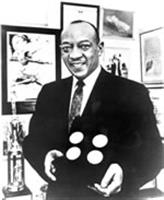 Ran, hurdled, and jumped for Cleveland East Tech High School and Ohio State University. Won four gold medals in the 1936 Olympics. Set/tied 12 outdoor world records and four indoor world records, all were American records and all but one a college record. That other one came in high school when he ran a 9.4 - 100 yards at Chicago National High School Track Meet, where he also won the 220 and long jump. The 220 win was also a national record. He had set the national record in the long jump earlier in the season for a total of three national records. Six of the world records came in the 1935 Big Ten outdoor meet. He won four national AAU outdoor events and scored in four others and two AAU indoor events. He won nine events in the state high school track meet. He won the national AAU long jump while in high school. He set the national high school record in the indoor 50. He set 11 Ohio high school outdoor and two indoor records. He set 15 Ohio college outdoor and six indoor records. He is also enshrined in the National Track Hall of Fame.