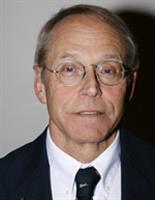 The Ed Barker Award is given as acknowledgement to the individual who has shown the most exceptional service to the OAT & CCC and to the sports of track and cross country in Ohio. This year’s most deserving honoree is Bob Karl. Mr. Karl has served our Association for more than 29 years. Even though he has never held a voting position, he has had a consistent positive influence. Bob has been, and continues to be, an integral part of many of the Association’s most important committees. Bob’s first job came by Presidential appointment as Corresponding Secretary of the Executive Board for ten years. He has been the chairman of the Marv Crosten Scholarship Committee since 1992 and re-wrote the qualifications to fit today’s expectations. He has also served as Team Manager for the Mid West Meet of Champions five times. He edited the Association “Runner” in 1983 & 1984. Bob has moderated the Learn-by-Doing sessions at each track clinic and shared responsibilities at the Hall of Fame banquet for many years. He has volunteered his time working with the State Indoor Track Championship since the beginning. Mr. Karl has also proven to be an excellent coach since 1970. He has served as an assistant and as a head coach at all levels of our sports from 7th grade to 12th grade. Presently, he serves as Girls Assistant Coach at Bellbrook. During his coaching tenure, Bob has coached many League and District champions, team champions, and State qualifiers. He was named West Central Ohio AAA Coach of the Year and earned the coveted OHSAA Sportsmanship, Ethics, and Integrity Award.